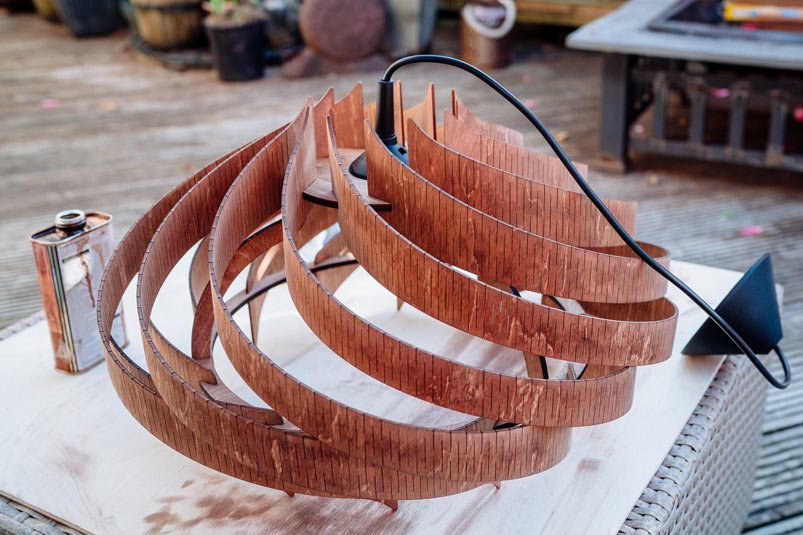 It seems a small thing but choosing a living room lampshade proved harder than we thought.

Don’t worry this won’t be a long read, it’s more of a little interlude before we go into detail about the living room projects we’ve managed during lockdown.

So which lampshade should we choose? that was something that was causing far too much browsing on Pinterest and various lampshade websites. The choice is endless, but if you’re going to the effort of decorating and using certain colours and styles then it feels like you should have the ‘right’ one.

These were the lampshade styles Pinterest was throwing at us, our general search terms were wooden, rustic, natural, wicker, boho, 70’s, you get the idea. We wanted something natural and organic, that was a little work of art and fitted with the rest of our style ideas. After much searching, we stumbled upon a nice design on eBay Here although now it’s twice the price we paid and they may not even be available by the time you come to click on the link. It was a flat-pack ‘build it yourself’ kit made from laser-cut plywood and despite having colour stain options we decided to order it plain and see how that looked first. 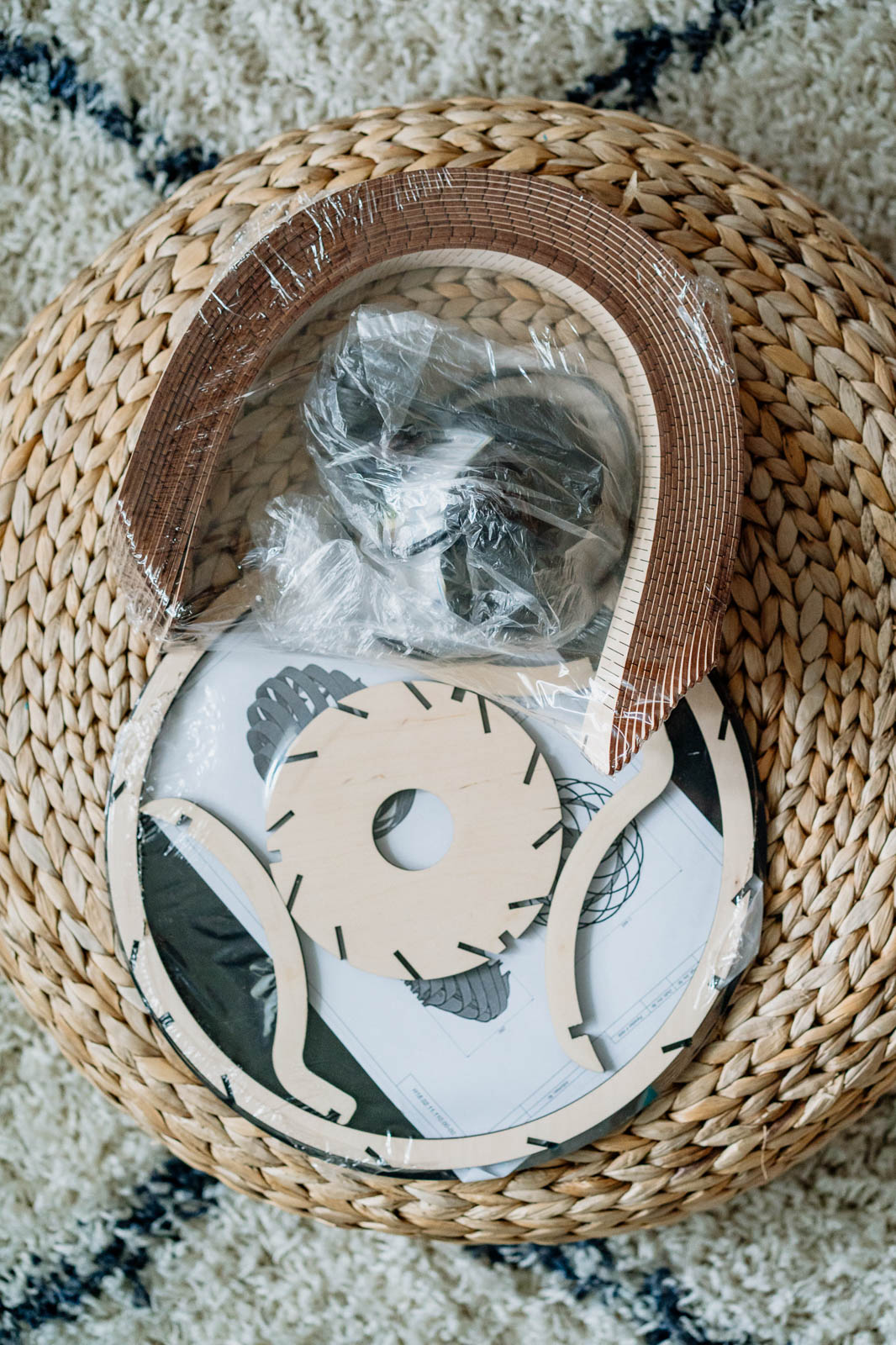 This is how the kit arrived. The frame is strong, the spiral parts are very flexible and a bit delicate, but they did include a spare piece… just in case. 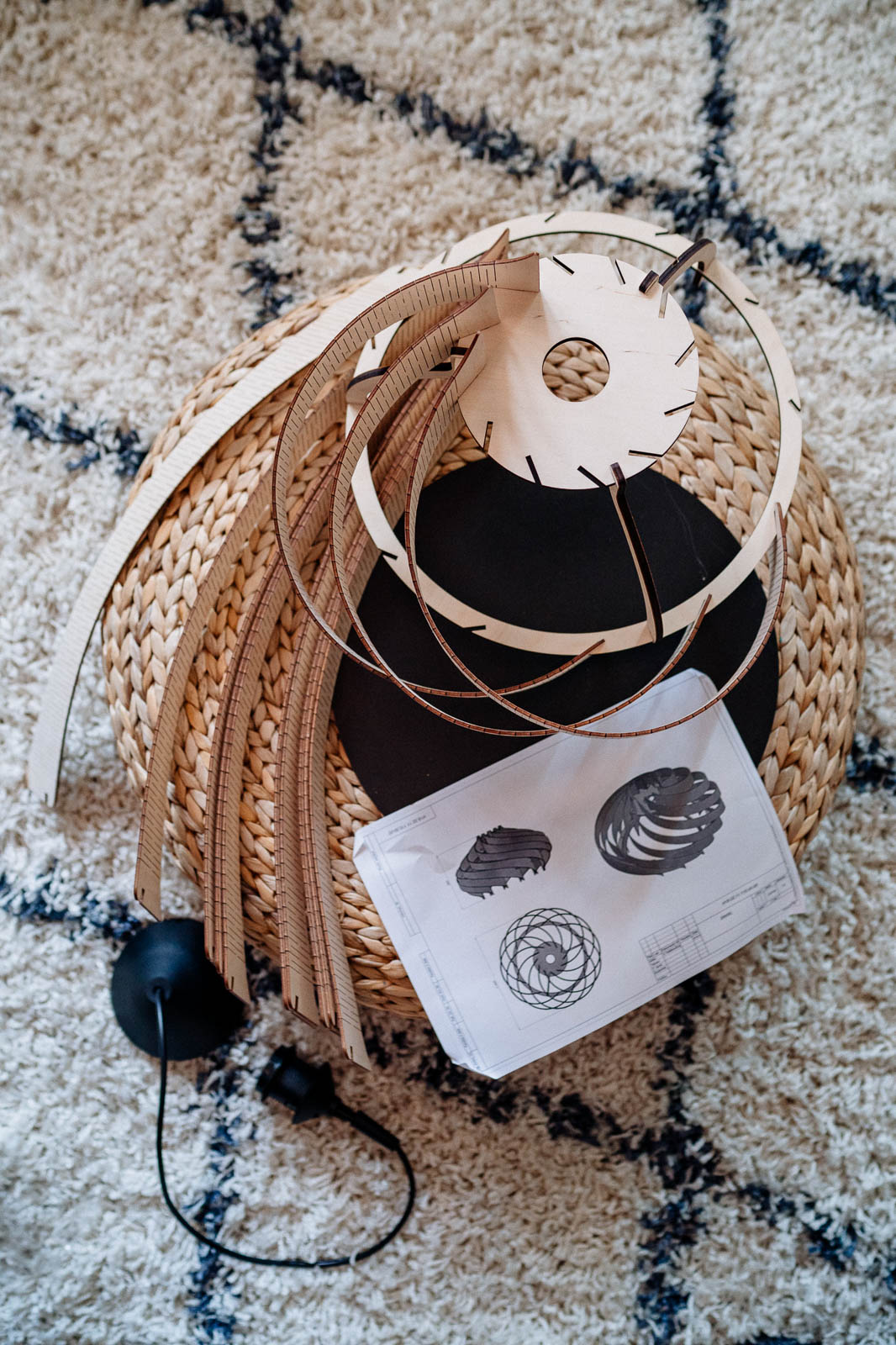 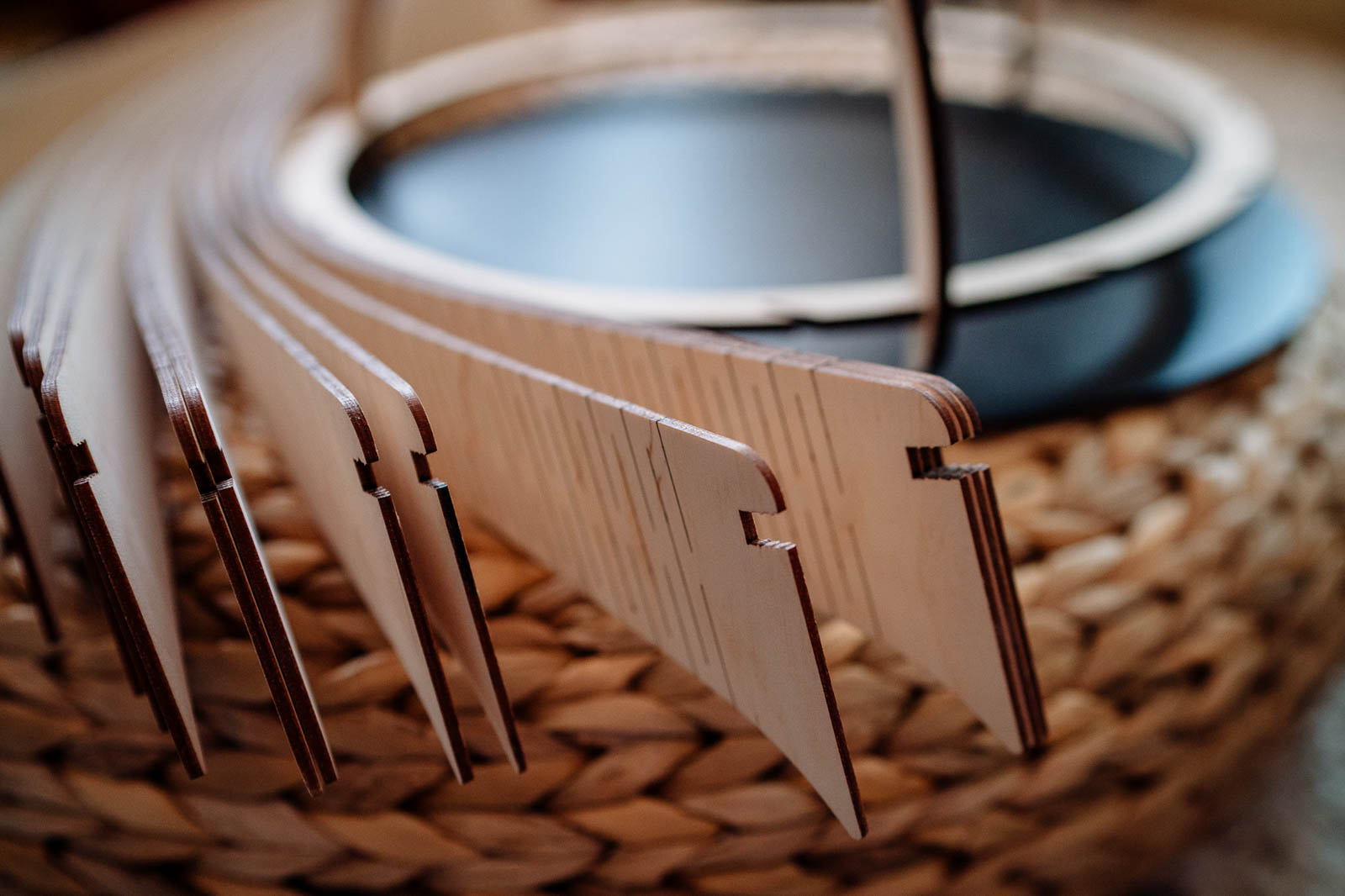 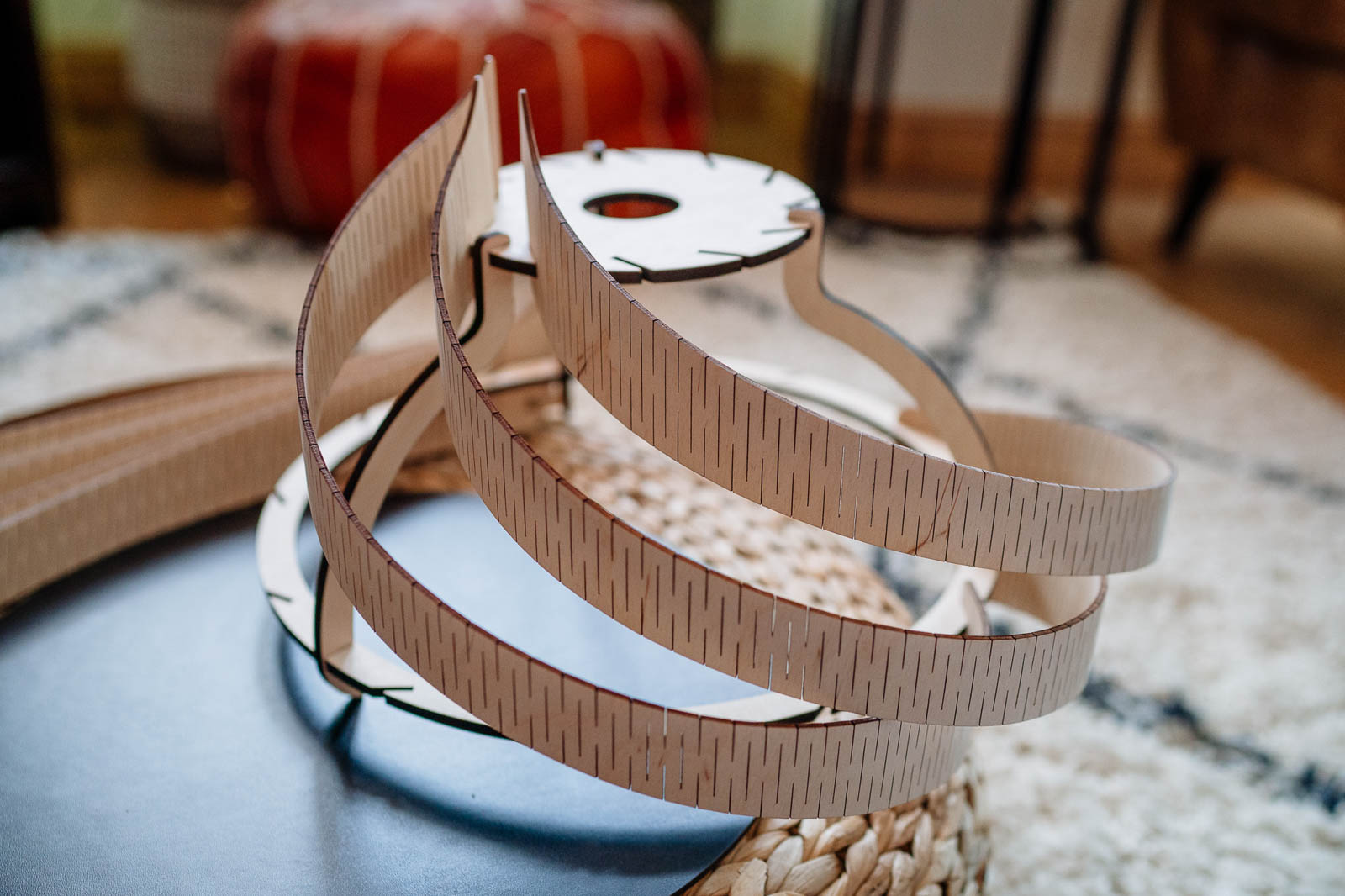 After a few plywood strips were attached we could see how it was starting to look and decided we would take it apart again and stain it. This was a little scary because the strips took some effort to slide into the slots and taking them back out felt like they would snap. 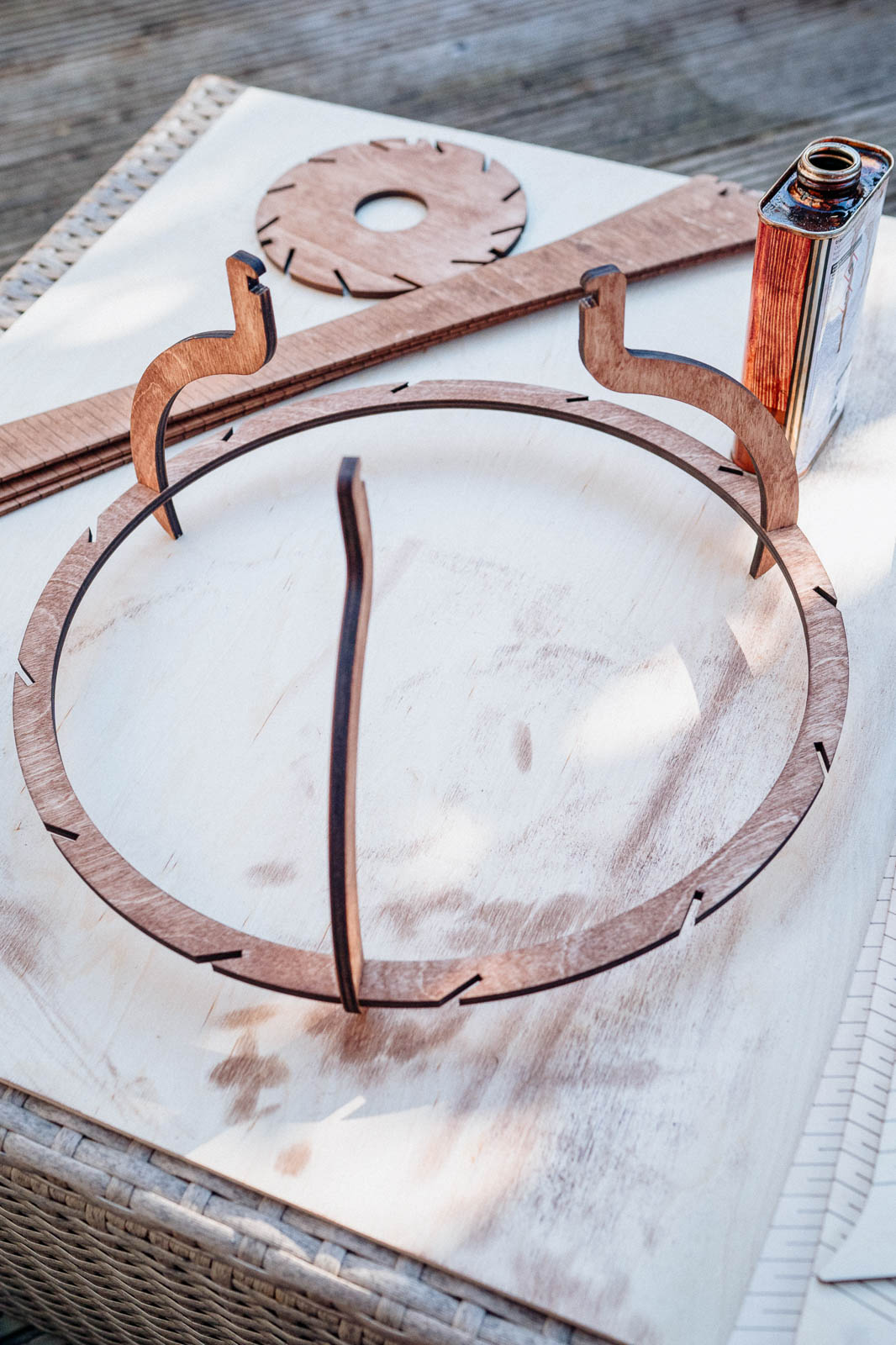 We used a walnut wood stain which soaked into the ply evenly and brought out all the texture in the wood. 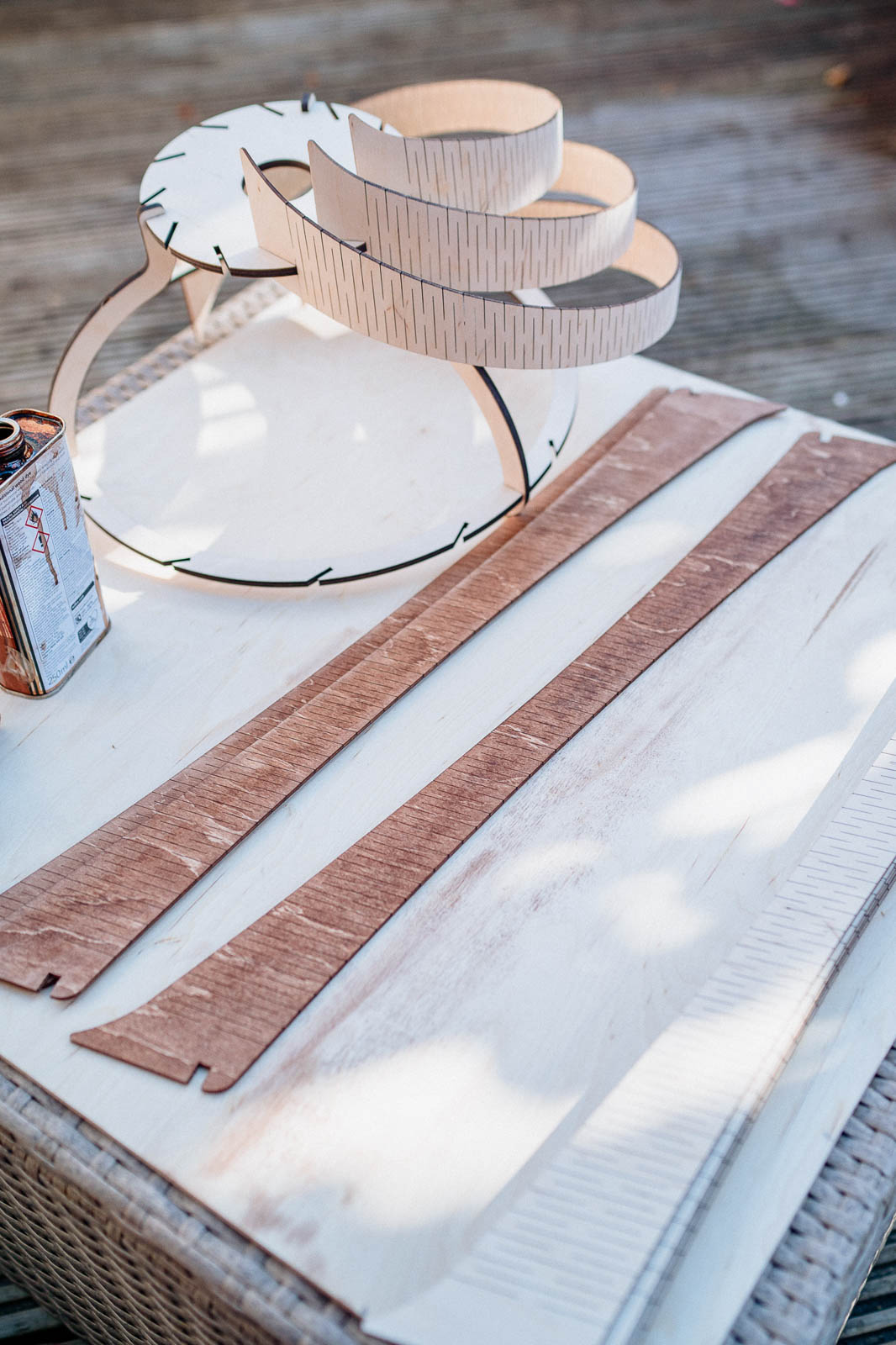 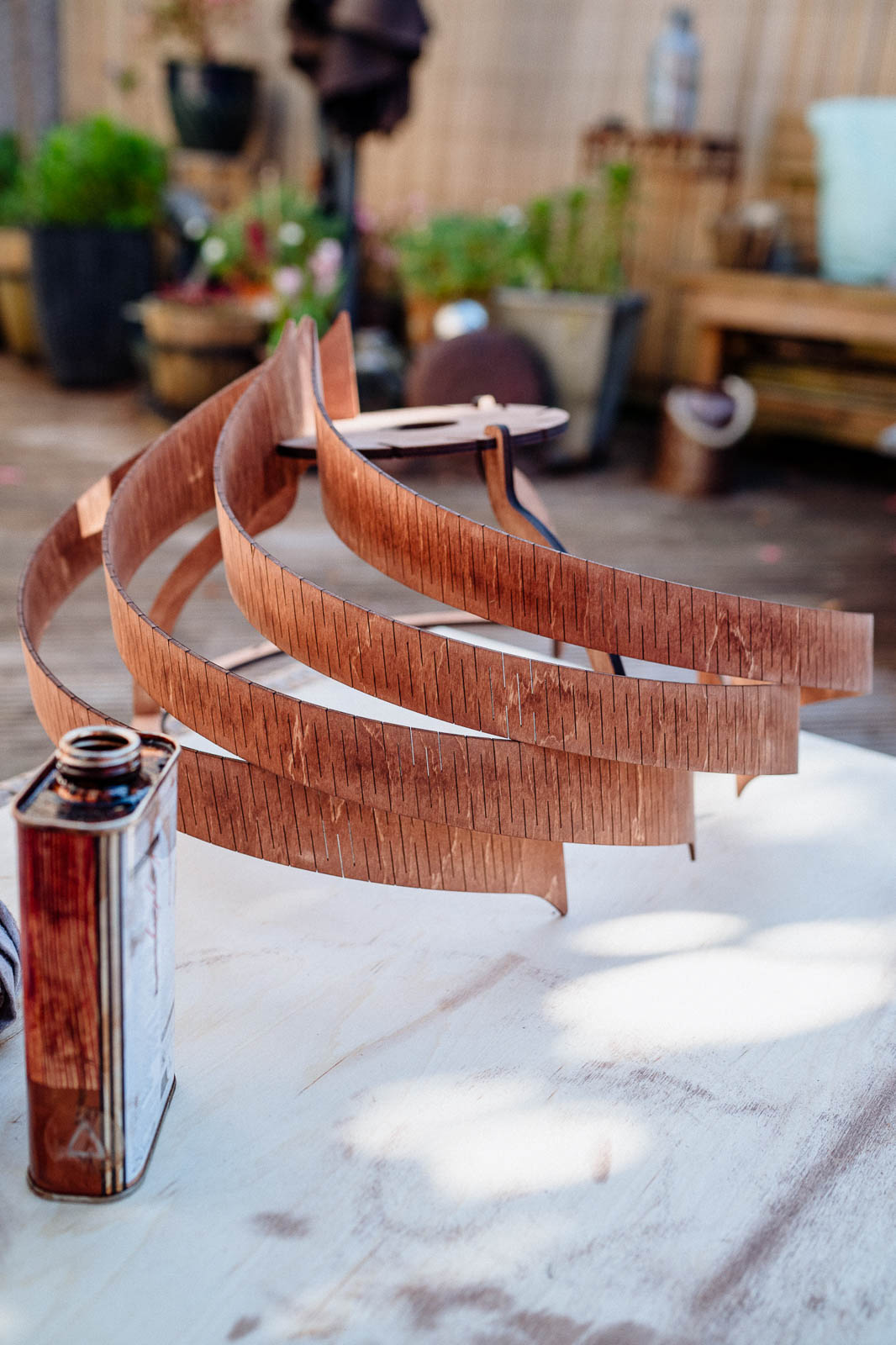 Once dry we were able to start building the lampshade again, taking extra care now we knew how tightly each piece went together. 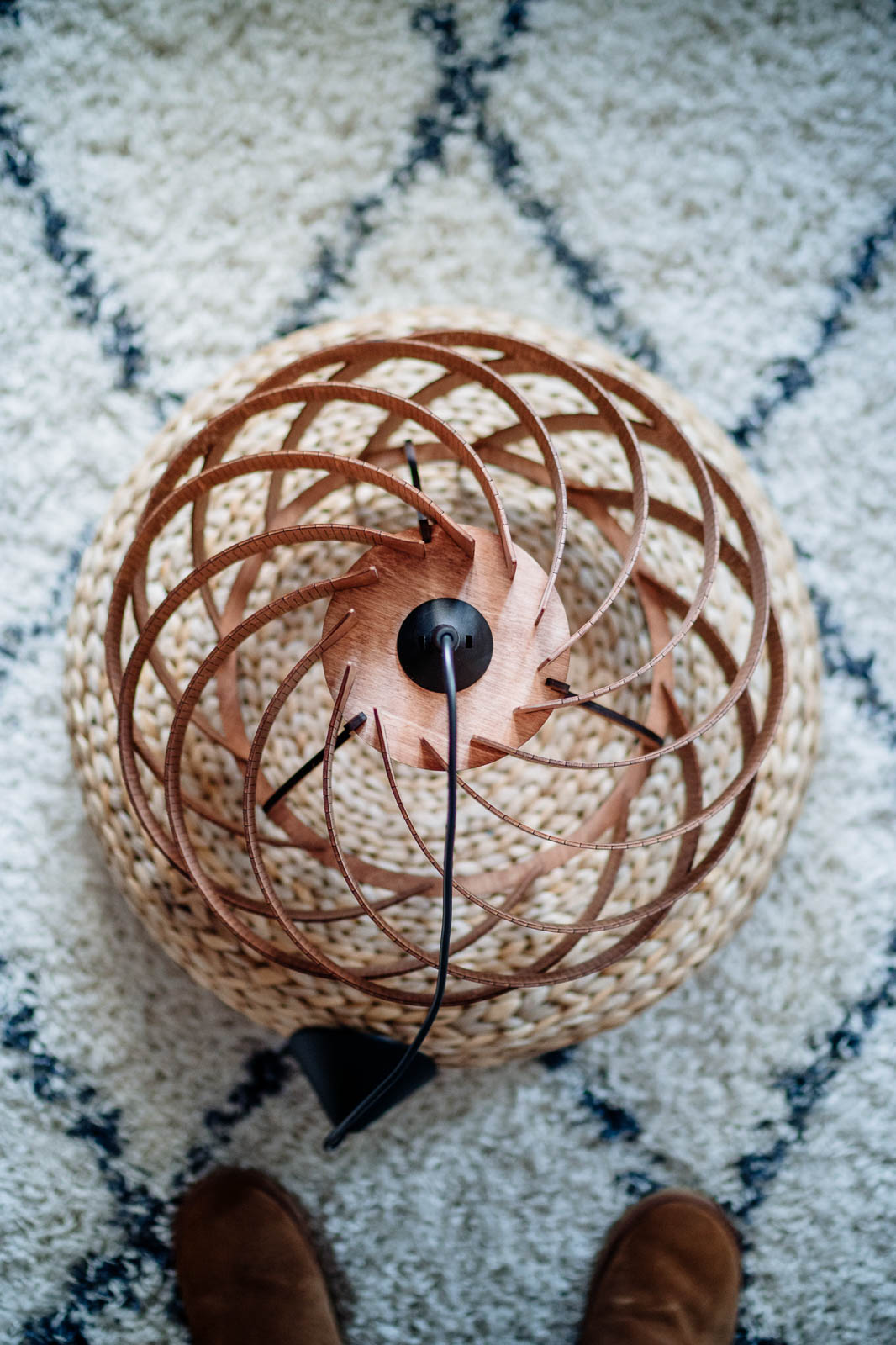 And here’s the finished piece. The cable came with plenty of length and was easy to adjust. We had planned to have the light positioned over the centre of the living space for the first time since we moved in. The original ceiling rose had been fitted to the centre of the whole room, which has always bothered me. I’m a big fan of suspended cables (if you’ve seen our kitchen) so we left the rose where it was and made a leather loop screwed into the ceiling to reposition the lampshade. 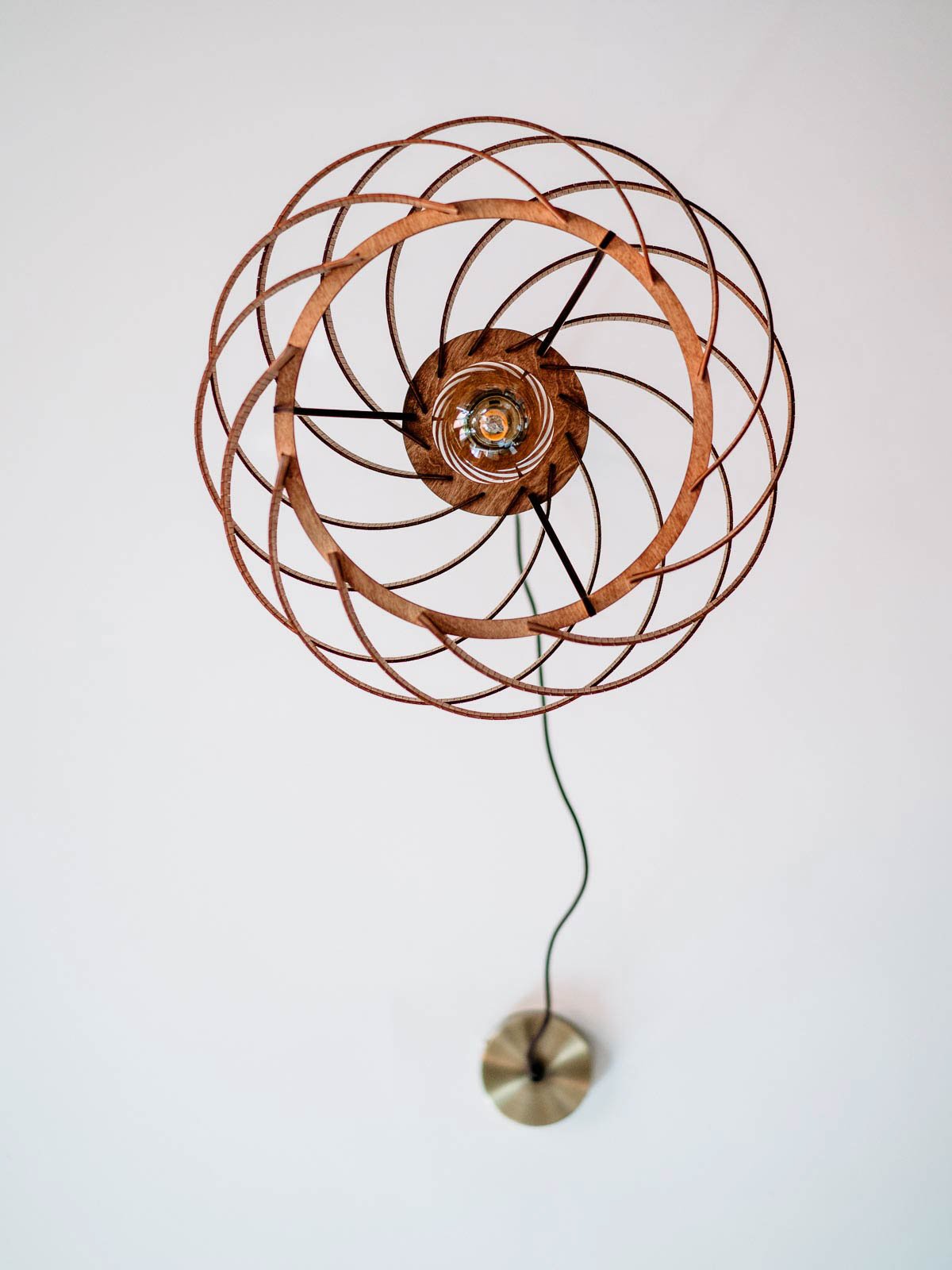 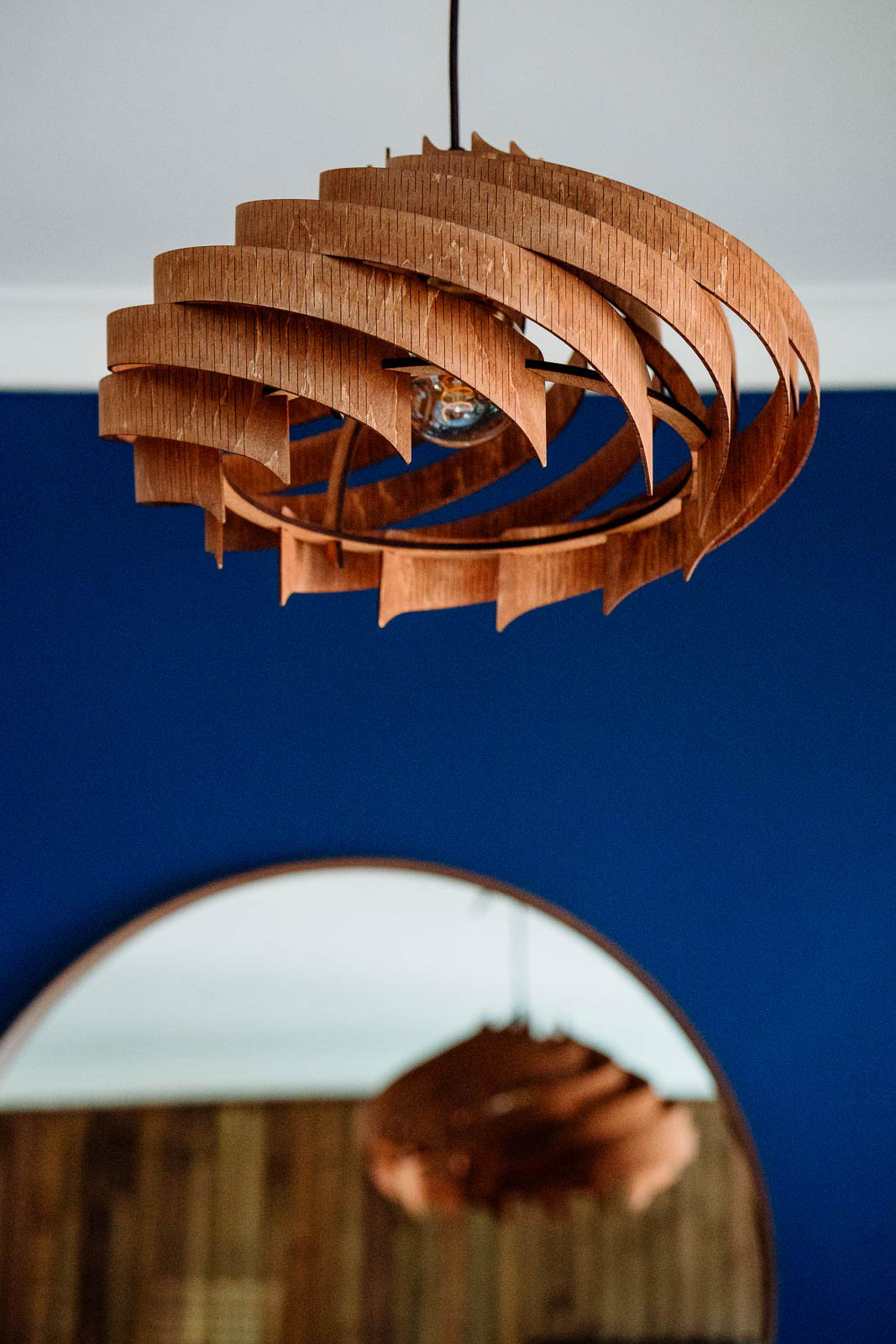 If you’re interested here’s a little video of how I made the leather loop, which was then attached to the ceiling with a plasterboard screw strong enough to support the weight of the lampshade.

Keep an eye out for our two-part living room makeover, actually, it will be a three-parter but we haven’t started building the last bit yet. 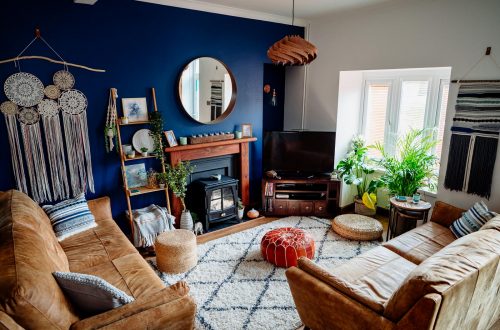