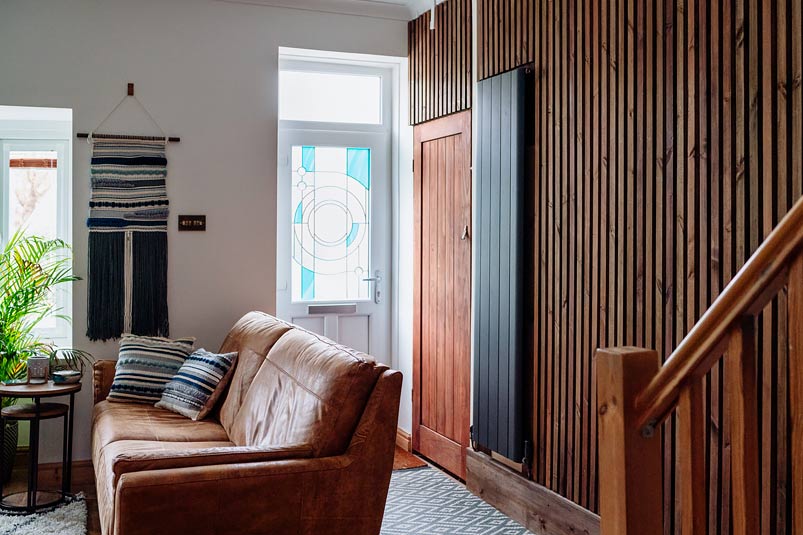 Hey everyone, during the Covid lockdown we’ve found the time to get creative with some ideas we’ve seen and wanted to implement for a while. We first thought of building a DIY vertical wooden slat wall after seeing some amazing interior designs on Pinterest. Some are called acoustic walls because they’re backed with sound damping material to reduce echo in large spaces, others are just timber slats attached to a wall for aesthetic reasons.

We pondered over various ideas for the wall. Paint it..nah! cover it with palette wood..maybe, but we felt that wouldn’t suit the rest of our plans. So stained timber slats were the way to go.

The first thing we built was a new large skirting panel. This boxed in the new radiator pipes but also provided a bit of clearance for the slats. Our entrance and living room is open plan so people coming in and out with bags, taking shoes off and general movement would mean the bottoms of the slats would get scuffed or damaged if they reached the floor.

We looked into a number of different tutorials on how to do this. This blog by theolivegreenwindow was our first inspiration. We decided we couldn’t do a ‘proper’ acoustic wall because it needed to be quite low profile as it’s the open plan entrance to our home as well as part of the living room.

We wanted the visible wall to also be wood, rather than just nailing the slats straight to the wall (which I guess would have been a lot easier). So our initial idea was to flip everything face down, use spacers between the slats and create panels nailed from the back to hide the nails, which could then be attached in rows to the wall. So this was our first issue. Despite the slats being planed wood, some were quite twisted or bent and without a great deal of force some of them would not attach straight.

We had bought a nailgun, a cheap one, in Wilkos on a whim weeks before, thinking “that’ll go through the ply behind and in to the wood”. Problem is, it only fired nails up to 16mm in size, so by changing the plan and attaching the slats from the front this nailgun was useless. We had to do it the old fashioned way.

We had new radiators in March before lockdown and at that point, we were unsure it was possible to build this wall, it was still just an idea. The 4mm ply sheets had to be cut around the radiator leaving room for the heat not to affect them, they were then stained and fitted. A tiny unused cupboard above the door was boarded over too. Each slat was sanded and stained with a water-based walnut wood dye (point 3. get plenty of wood dye, as opposed to running out, then waiting a week for more to be delivered by mail because DIY stores were locked down too)

We started next to the radiator, this was just to make sure we could get the slats close enough without being affected by heat, then we worked the rest off from that point. Grip glue was used to help secure the slats in place while nailing, it also removed any movement or rattle between the timber and the back ply. (Our walls are not flat, it will be a recurring theme on DIY projects, walls aren’t flat, corners are not 90 degrees)

It took two days to line up and attach all the slats. The only thing left to do is the plastic pipe cover for the radiator which needs a coat of brown paint, but we’re still locked down so I need to order something online.

Keep checking in for more updates, if you follow us on Instagram you will see we’ve been working on the rest of the living room, so we’ll be posting a blog about that soon. Also check out our kitchen renovation.